Where are the nasty Parisians? 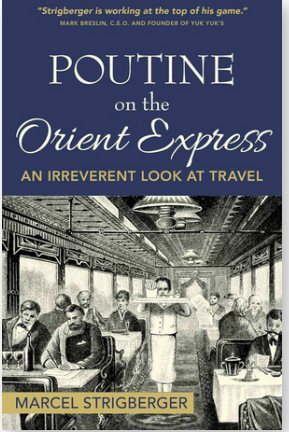 Ever harbour an inexplicable bias against some places? Enjoy “Where are the nasty Parisians?”,  an excerpt from Poutine on the Orient Express: An Irreverent Look at Travel.

Where are the nasty Parisians?

Parisians have the dubious reputation of being rude and snarky to visitors.  After all, everyone knows Parisians won’t give you the time of day, including directions.  Or rather more likely, they will give you misleading directions.

I grew up with this perception of Parisians, and it accompanied me when my train pulled up at the Gare du Nord that evening back in my college days.

I had no idea where I was going.  My friends had all warned me about this city of nasty people.  With trepidation I lined up at the information kiosk with my heavy luggage.  I felt about as comfortable as the three little pigs asking the wolf for advice on architecture.

The queue was a bit long.  I said to myself, “It figures.  The visitor information people are probably stonewalling the tourists, not giving them anything.”

I decided I didn’t need their misleading information anyway, and I left the station.

It then occurred to me that I had no clue where I would be spending the night.  I did have the name of a small hotel near the Notre Dame.  I would have called them, but I was certain they would have told me there was no vacancy even though the place was probably empty.  Parisians are that way you know.

And so I walked a block or two outside the station with my luggage, which included a bag and a backpack, getting heavier by the moment.

It was getting darker now and I was also hungry.  Against my better judgment, I walked over to a sidewalk café.  A waiter wearing a large white apron and sporting a bicycle-handlebar moustache came over.  As he was smiling from ear to ear, I had no doubt the food in this place was either toxic or, at best, stale and rancid.

Hey, this was Paris.  Jean Valjean got twenty years here for stealing a loaf of bread to feed his hungry family.  I ran my hands over my pockets to make sure I still had my money on me before ordering.  After all, as we all know, this was pickpocket city.

I returned the waiter’s probably phony smile with a smile of my own, as I didn’t want to show contempt lest he attack me with a cleaver.  I ordered a piece of baguette with jam and a café.  I figured that was safe.  It was also inexpensive, at least on the menu.  Of course, I expected the usual Parisian hidden charges, the result of which, should I be unable or unwilling to pay, would find me tossed into the Bastille.

To my surprise, my order arrived quickly.  Then again, I was sure the guinea pigs were usually the first to be fed.

I squeezed the bread and it crunched perfectly.  It was probably in the oven while I was still on the train.  But then again, I knew there was a trick here.  The waiter could accidentally not have given me the frozen stuff reserved for the tourists.

The café tasted as good as it smelled.  The waiter offered me a refill, but I refused.  His apparent generous offer was no doubt motivated by the fact that the poison in the first cup had not yet started to take effect.  He wasn’t fooling me.  This guy probably catered Rasputin’s last meal.

We started chatting, and inadvertently I blurted out that I had no place yet to stay for the night.  I happened to mention the Hôtel des Tournelles in the Latin Quarter, and I expected him to laugh and say, “Don’t bother, it’s always booked.”

Instead, he telephoned the hotel and booked me a room for the night.

I wondered, what’s in it for him.  I thought, maybe it’s a trap.  After all, if this were four thousand years earlier, this city would probably be twinned with Sodom and Gomorrah.  I’ll get there and they’ll take my luggage and throw me out.  No way José.

However, I figured the hotel was my pick.  I decided to chance it.  I paid my bill and was about to leave when the waiter asked, “Monsieur, do you wish me to tell you how to get there?”

“Ah huh,” I thought.  I knew it was near the Saint-Michel Metro station.  I thought I’d play along with the sadist, listening to him direct me to Athens.  I had his number.

He said, “You must take the Metro to Saint-Michel.”

He then directed me to the nearest Metro station.  Before I could lift my bag, he said, “Allow me to help.”

He then carried my valise, walking along with me for three blocks to the Metro.

At the station he shook my hand and wished me a pleasant stay in Paris.

No, I did not count my fingers.  They were still there, as was my wallet.

I arrived at the hotel and things only improved from there.  I had a great time.

I recently came across a lost French tourist wandering around Toronto’s Union Station.  I offered to assist with his bags, and he looked at me very suspiciously, spurning my bid.

I wonder what his friends told him about us.

Poutine on the Orient Express: An Irreverent Look at Travel, is available in eBook and paper versions on Amazon, Apple books etc., and wherever books are sold.  Please click on books page  to check out links for some of these sources.