Me, me and my self directed RRSP-a little conflict of interest 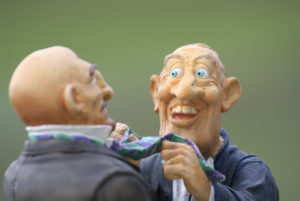 For years now I have been kicking in thousands of dollars a year into a self-directed Registered Retirement Savings Plan (RRSP). And for years now (the same number actually), I have been trying to think of ingenious ways of getting the money back out without promptly paying tax.

A while back I bought a house and my accountant suggested that I could finally hit the fund, using the same to finance the purchase. The catch, however, was that I would have to replenish the kitty with a mortgage and pay back the money monthly/

“Do you mean I would be both the mortgagor and mortgagee?” I asked my accountant.

“Exactly. You pay the money to yourself. But it’s an arm’s length mortgage. You must pay it monthly, come hell or high water – or my bill.”

This sounded like a win-win situation. I busted my RRSP and placed the mortgage on the house. I made the first couple of mortgage payments no problem.

Unfortunately, the conflict of wearing two hats soon started heating up. I received a whopping realty tax bill from the municipality. It was so high that the amount apportioned to school taxes alone could have bought all of Oxford University.

“There’s no way I’m paying this,” I said to myself. I missed the due date and I felt good. It then hit me that the mortgage had a provision in it that if the mortgager fails to make a tax payment, he is in default and the mortgagee can pay it and add the tab to the mortgage debt. That didn’t worry me.

As mortgagee, however, there was no way I was going to permit any compromise to my retirement nest egg and I promptly made the payment. I then sent the mortgagor a letter as follows:

We have just paid the outstanding realty taxes that ought to have been paid by you. We trust that this was just an oversight. Please don’t let it happen again or action will be taken against you.

When I received the letter, I was furious. “Stuff it!” I exclaimed, tearing it to confetti.

A few weeks later there was a leak in my basement. It was apparent that major work was necessary. But funds were a bit tight and I had other matters to worry about than a dumb leaky basement.

As mortgagee, I just happened to peruse the mortgage and I noticed the provision whereby the mortgagee has a right to inspect the premises to make sure his investment is sound and if the place needs repairs, he can compel the mortgagor to fix it up.

Quite by chance I decided to go down to the basement to check on my security and lo and behold, a flood.

“How did that irresponsible duffer allow it to go this far?” I bellowed.

I didn’t even bother writing. I called in a contractor immediately and tacked the bill onto the mortgage debt. “I’m going to have to inspect this place more often in view of the slob living here,” I told my wife.

For the next few months the debtor and creditor lived in harmony until one day I bought a new car and I wanted to defer my mortgage payments for a couple of months.

“The hell with that mortgagee,” I said to myself. “What will he do if I don’t pay? Take a pound of flesh?”

It was mid-month and as I was sitting at my office desk contemplating my fortune, I realized that I had not yet received my mortgage payment. I decided to call the mortgagor at home and guess what, there was no answer. I was convinced I was dealing with a deadbeat and enough was enough. I decided to see a lawyer.

It occurred to me however that since I was a lawyer myself perhaps under the circumstances, I could take a shortcut and handle the matter in-house. I might have a fool for a client, but who’s going to tell? I fired off the following letter, by registered mail.

My client advises that once again you are in default. Monies now overdue must reach this office no later than 4pm this Friday, failing which foreclosure proceedings will be commenced against you without further notice. In addition, you must also include the sum of $100 for legal costs.

I attended the postal clerk, who wanted to see some identification to make sure who I was. She then handed me the letter. She seemed puzzled as she put away my business card.

I noticed the envelope was from a law office. I opened it, read the letter and hit the roof. “Foreclose me will he? I slaved for years to buy this house and to make a home for my wife and three lovely kiddies. Doesn’t he care?”

The clerk asked me if there was a problem with the letter and after explaining it all to her, she went postal. She put on her hat and coat and ran out of the building.

I was livid. In view of my emotional state I thought I had better see a lawyer. I then thought to myself, “what the heck.” I made a call and the receptionist said that Mr. Strigberger could see me first thing tomorrow morning.

I got to the law office at 8:30 the next morning. Unfortunately, in my eagerness I had to wait a half hour, as the office did not open until 9:00.  At 9:01 I charged right past the receptionist into Strigberger’s office and threw the letter on the desk.

It was 9:02 when I was sitting behind my desk and noticed this very upset character barge into my office and throw a letter on my desk. I skimmed the letter and the urgency of the matter was apparent.

I told the client to relax and assured him that I would take the situation in hand. I firstly wanted to dispose of an important preliminary matter and so I made a couple of comments.  The client was not happy at all.

I came to the office for legal assistance and you won’t believe this: before taking on the case, Strigberger wanted a $1,000 retainer. He said something about it being novel. I stormed out of the office.

“Let him foreclosure me all he wants.” I said. I pondered the situation and realized that I would have the last laugh. I would rigorously defend any action brought and come trial time, I would pull the necessary strings to make sure the mortgagee and his lawyer would never show up in court.