Boomer biased bites: excerpt from Boomers, Zoomers and Other Oomers 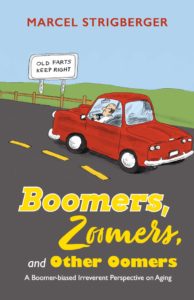 We boomers are very OK

As we get older, or should I say “better,” we experience a variety of prejudices. Actually, the first thought that comes to mind is that maybe we don’t really get better. At least physically. Maybe wiser. Probably wiser. And if we act wisely, we can best hold our own physically. So that is better.

Let’s deal with the prejudices, OK? OK boomer that is. This 2019 comment was the brainchild of some age twenty-something New Zealand member of parliament who in response to a senior MP said, “OK boomer.” This has become a derogatory phrase meaning, in short, “We hear you; now go back to your planet.”

This expression became viral, and it unfortunately was followed shortly thereafter by another virus—something 19. One virus leads to another. It delineates the controversy and conflict between the boomers and the Generation Zs and millennials. At least we boomers don’t proudly call a small Starbucks coffee a “Grande.”

All of which gets me back to one of my favourite authors, Mark Twain, whose perspective of the youth bears repeating: “When I was a boy of fourteen, my father was so ignorant I could hardly stand to have the old man around. But when I got to be twenty-one, I was astonished at how much the old man had learned in seven years.”

Do these words still resonate? The younger generation has always been skeptical and critical of their older folk, and we elders have always suggested these wet-behind-the-ears spring chickens have a thing to learn from us, and they don’t know how good they have it.

I’m sure these sentiments were readily rampant throughout history. Probably after Gutenberg invented the printing press, the younger set were the prime customers of printed products. The sons likely said to their dads, “Hey, old man. Want the news? Pick up a newspaper.”

The father likely responded, “Don’t interrupt me, Eric. I’m trying to listen to the town crier.” I’ll add that after this interruption the dads likely also boxed the kids’ ears. Good for them.

I’ll confess that in my non-golden years, I also had similar negative (and unwarranted) sentiments against older people. And the age bias is all relative.

While in our early twenties, my wife and I travelled through Europe by train. We were sitting in a compartment one day together with three other people of similar vintage and a slightly older gentleman. Actually, we didn’t know how old he was, but he made us uncomfortable. We all thought, what’s the railway doing letting this geezer occupy our compartment? Are they begging for a class-action lawsuit?

We were all curious about how old this guy was. All we knew was that he was a teacher from Wisconsin and that he was going to Zermatt, Switzerland. To determine his age, we decided to play a game and show one another our passports. This way we’d be able to take a peek at the old man’s date of birth. Our ages were in the eighteen to twenty-four range. We took a sneak peek at his passport, and get this, he was thirty-three years old! Our suspicions were confirmed. The railway stuck us with this old fart. Ugh! Wait ’til they hear from our lawyers.

This trentigenarian told us at length about the beauty of Zermatt, suggesting we make sure we go there. Our collective response was, “Right, sir. Can’t miss it.” I’m sure we all had visions of a bunch of residents from a retirement home lined up one behind the other making their way up the Matterhorn pushing their walkers.

Isn’t it all relative? To this day, Shoshana and I refer to anyone older who bores us with useless information as “Zermatt.” Come to think of it, our reaction does sound a bit like “Hey, boomer.” Guilty.

If you have aged since starting to read this excerpt, which hopefully you have enjoyed, this book may be of interest to you. Available in eBook and paper versions on Amazon, Indigo, Apple books etc., and wherever books are sold. Please click on books page  to check out links for some of these sources.